The Force Of The Question

“So there are no white Ghanaian people?”

Today I met them for the first time. We sat in a long, narrow and bright green room that was dimly lit because the gauze not only keeps out the mosquitos but also the light. They seemed reserved and excited. For one hour we talked: introducing ourselves, practicing a community of philosophical inquiry (CPI) and thinking about different kinds of questions.

The group seems close even though their ages supposedly vary from 9 to 16. I say supposedly because the teacher wasn’t sure about some. After introductions I told them we will do philosophy. No one had heard of that word. One younger female student stood up and spoke as if she was expected to recite an answer. “It is, when you are able to play with each other”

“Play is definitely important,” I responded.

They had just finished a science class in which they had to copy from the board that ‘you think with your brain’ and that this is related to voluntary actions. Because of this I asked “If thinking is related to doing, does it matter if we think well?”. A resounding “Yes!” came back. We started discussing questions and when I asked them what a question is they seemed hesitant to respond. After two or three came up with examples like “Who is your mother?”, “Where is my hand?” and “What is education?” others quickly followed. Next I asked them: “Are there questions with no answer?” Silence ensued.

“No,” while shaking their heads.

“Ok, please explain to me the meaning of life?”

An older female student had an idea: “What is the meaning of death?” Some of the others reacted as if she had broached a forbidden topic, but there were also some immediate responses like “funerals” or “caring for each other”.

“What would happen then if we take a pill that would allow you to live forever?” I asked.

“That would be strange.”

“Then you’d be God and thats not possible.”

“But what if God gave you that pill? And God also gave you the choice! Would you take it? Why?”

Because it didn’t resonate I decided to move back to different kinds of ‘questions’. They understood that some of the earlier questions they mentioned were ones we can easily verify but that other ones were far more complex. I wanted them to ‘sense’ the difference and so decided to broach the topic of friendship by asking who has a best friend. Most raised their hands and were happy to share while I also asked to explain how they know that that is their best friend. They found it interesting that people had different ways of deciding why somebody is their friend.

“Does anyone have an animal as their best friend like an elephant or giraffe?”

“Why can a dog be your best friend?”

“Because the dog can guard your house when you’re away.”

“I can guard you’re house when you’re away and become your best friend?” I said with a cheeky grin.

I was happy at least to hear a criterium being brought up. A first dive into the question-criterium-concept relationship. After introducing them to bigger and smaller questions in the context of our dialogue they seemed to have developed sense of distinction between the two.

We also did a Thinking Chairs activity where I say “Change seats if…”, which starts simple with having been on a bicycle or liking fufu; a West African staple food made of cassava and plantain flour. Then I ask them to change seats if they have ever killed a mosquito. All get up.

“Because they give you malaria.”

“They suck your blood.”

The following question is to change seats if they have ever killed a dog. Silence.

“How is the dog different from the mosquito? It can also bite you and give you illnesses,” I asked.

“The dog has more purpose,” one student said.

Friends, the act of guarding, animals and having purpose congealed through this brief inquiry. The level of noise increased, however, and I felt they were not listening well to each other. I decided to touch upon the importance of listening to each other in dialogue by playing the Telephone Game. One person whispers a sentence in the ear of the next person and so on until we return to the original person.

The first two rounds the sentence came out completely different. I asked them why and they answered that its because somebody changes the sentence.

“So they don’t listen well?”

“What do we need to do then to try and hear what the other person is saying?”

The third round was perfect. 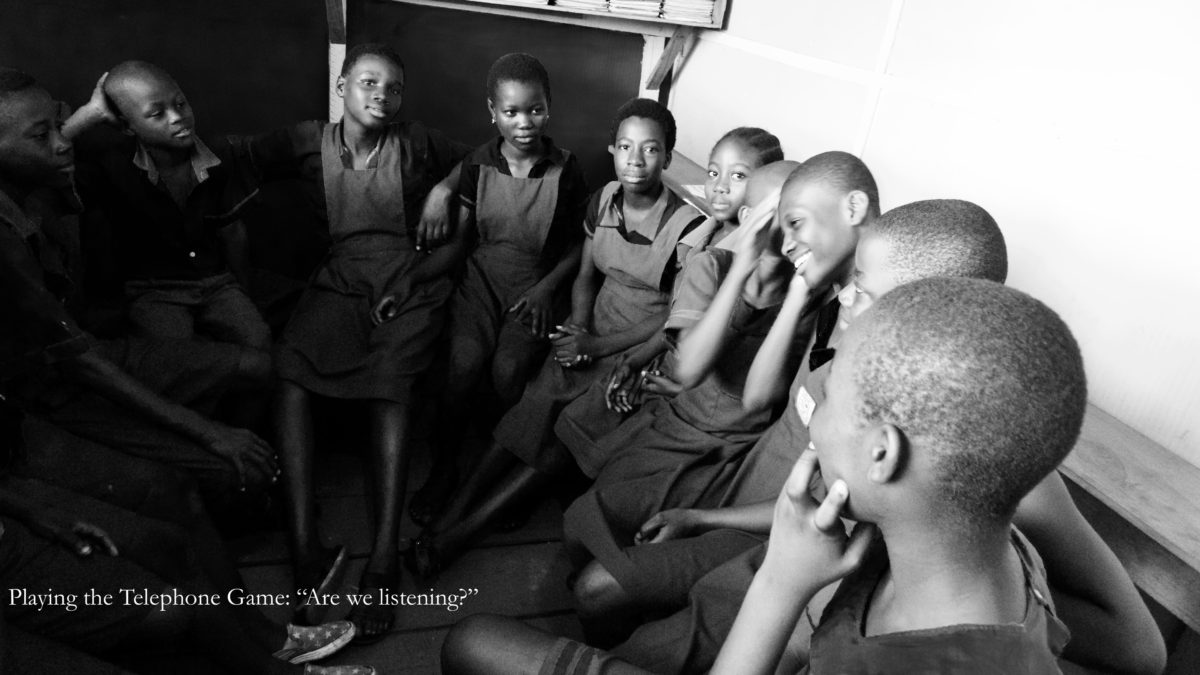 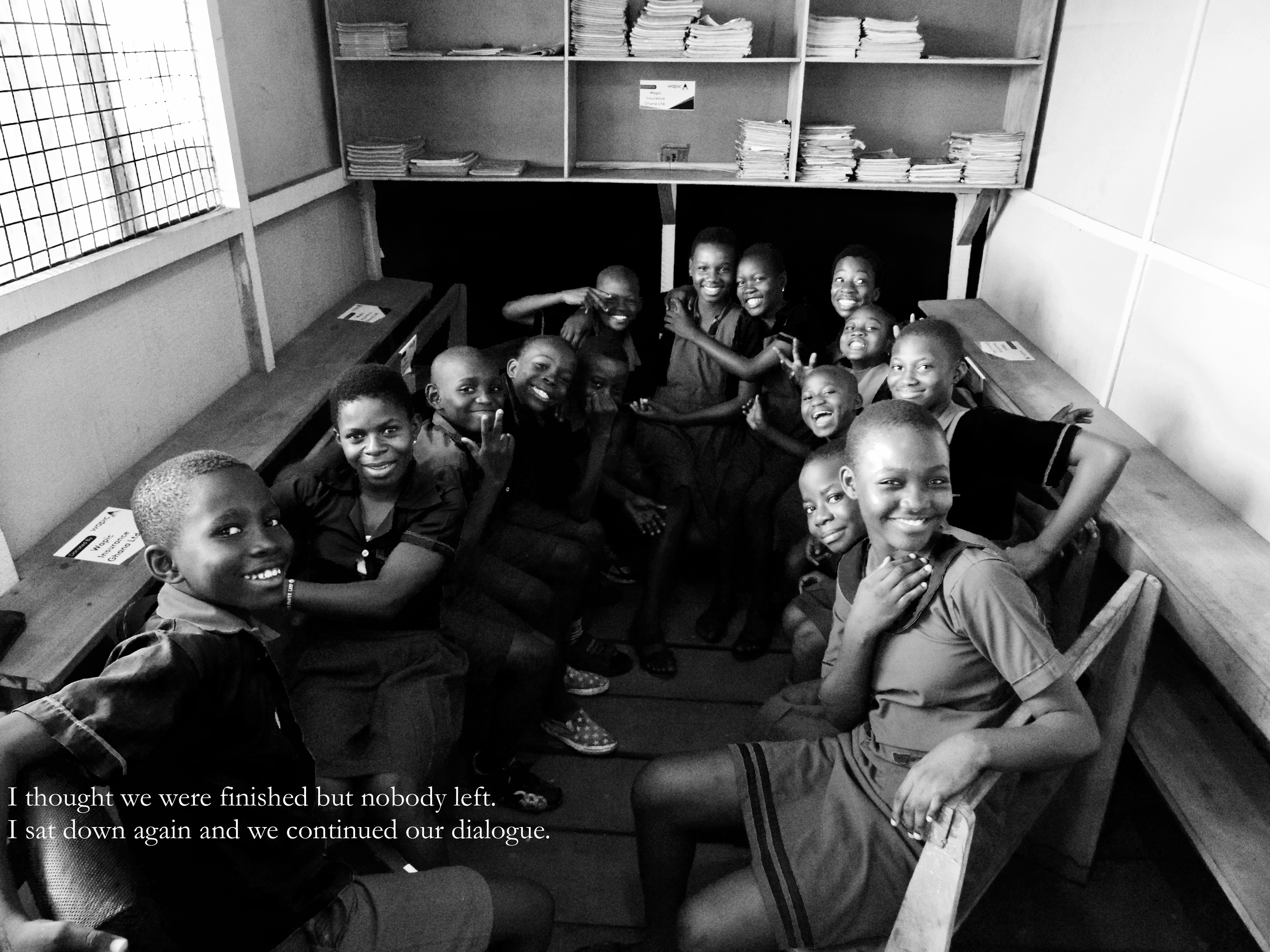 Before I left, I talked to their teacher. His name is Hope.

“Why don’t they go to a normal school?”

“They cant afford it or their parents don’t care.”

“How much do they pay here?”

“What will they be doing after they finish here at Future Academy?”

“You need a high school certificate to apply for jobs. They wont have that so they will probably work on the streets. Sell things. But maybe they can go on to high school if its affordable and then its about passing the exam.”

I had to leave but wanted to make sure I would be able to come back next week. 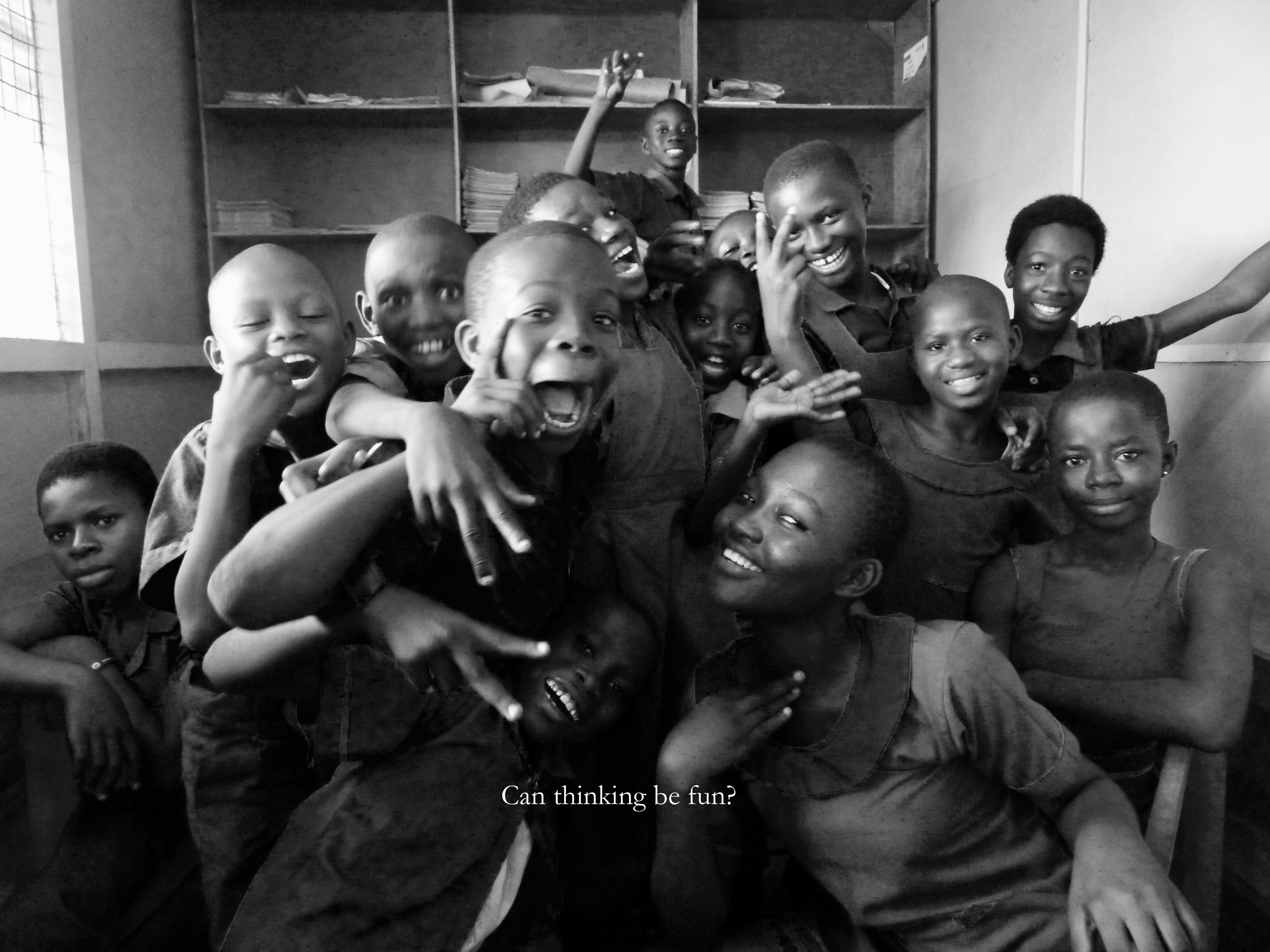